The SA Branch held its Virtual Garden Party at Carrick Hill on Sunday 22 March just before the South Australian Premier, Stephen Marshall, announced the closing of the state’s borders, pubs, clubs and gyms. On this sunny late summer’s day snuggled next to the Alister Clark Rose garden under the shade of a great oak, members did what the Society does best: gather for gentle informal talk of gardens and life with a critical view of the past and a keen eye on the future.

Seventeen members attended exercising Social Distance protocols during the hour long proceedings of toast, speech, cake cutting and virtual planting of a pair of apple trees for the Heritage orchard at Carrick Hill. The two trees supplied by Bishops Orchard in the Basket Ranges, a horticulturally important concern having won many prizes for their fruit and trees at the Royal Horticultural Show Adelaide. Dr Patricia Michel ( a descendant of the Bishop orchardist family) explained the significance of the plants Malus domestica Granny Smith var. ‘Leprechaun’ tm and Malus domestica Cripps Pink var. ‘Pinkabelle’ tm the former Australia’s most famous apple and the latter the most grown and eaten apple worldwide. She explained that both had their own Wikipedia entries indicating their high status in the digital age!

Amongst those attending was Tony Whitehill, a founding member of the Branch who appeared with Margaret Sando’s spade as she could not attend herself but is another founding member. Richard Heathcote 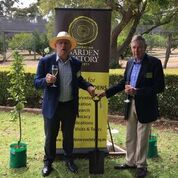 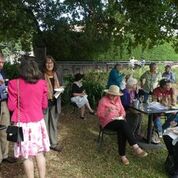 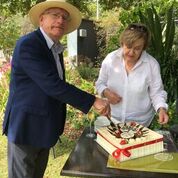 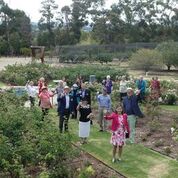