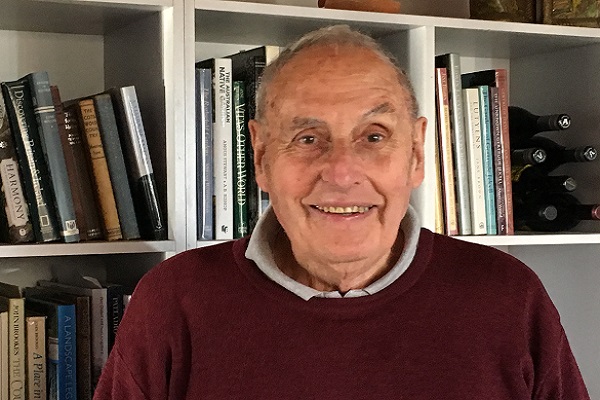 Cedric seizes opportunities at every turn: he recounts a story of enterprise and endeavour. He discusses his family’s background in farming, growing vegetables and fruits at Bovingdon UK, where he was born in 1939 and grew up – So I’d been brought up in an atmosphere of gardening, as well as farming. I guess it was in the blood, as they say.

His grandparents had a flower nursery and in 1946 his grandmother branched out to open a wholesale nursery specialising in begonias. Today Bryants Nursery in Bovingdon is a large wholesale nursery with approximately 80 staff supplying bedding plants to many garden centres throughout the south east of UK.

His father was a champion dairy farmer whose pride and joy was his cows, and winning the Clean Milk Competition and the Challenge Cup in 1979 for the quality of his milk. And his enterprising mother established a successful chicken and egg business in order to pay for the education of Cedric and his sister.

At the age of 7 Cedric went to boarding school and loved every aspect of it. In 1953 he began public school and recalled his cadet military training. He finished schooling in December 1956 and in February 1957, at the age of 17, he joined with the Big Brother Movement to travel by ship to Australia, describing himself then as a man of the world.

He first spent time at the Big Brother camp at Cecil Park near Liverpool near Sydney before travelling by train to Gunnedah to work on Bulga Station. It was a huge property with many new experiences, learning to slaughter sheep and cattle, working with shearers and plowing. After 18 months Cedric moved into town on the Saturday and had a new job by Monday at the modern co-op store where he also did sign-writing for shop displays. Shortly afterwards the shop owner became the first Australian distributor of PortaGas and Cedric was trained as a gas fitter. Cedric describes the immediate improvement access to bottled gas provided to farmers and with a surge in demand the business prospered.

When Cedric’s father died in 1959 he returned to the UK then came back to live in Gunnedah the following year, bringing with him his mother and younger sister. His mother became house manager of a ski lodge in Thredbo.

Cedric met his fiancé in Gunnedah but her job took her to Canberra. During his courtship every month he drove a 1,215 mile round-trip to Canberra to visit his fiancé and to Thredbo to see his mother, then back to Gunnedah.

After he married in 1965 he worked for Esso and PortaGas, moving to Sydney, Cooma, Forbes then to Canberra in 1968 where he helped established the gas industry – and began growing fuchsias. Initially a relaxing hobby soon he had more than 300 varieties of fuchsias in the backyard, which disappeared under glasshouses, and 3 – 4,000 small pots of fuchsias. Cedric ran weekend workshops which became known as Mr Bryant’s Fuchsias, served afternoon teas, printed a magazine and was winning many prizes at the Horticultural Society of Canberra’s shows. I was mad on fuchsias … entered in my fuchsias, won the competitions.

In the evening he studied at the School of Horticulture in Canberra where fellow students included members of the public and government employees who looked after Canberra’s parks and gardens, creating a Garden City, Bush Capital. He comments about the changes to Canberra – smaller blocks of land with virtually no room for gardens.

Cedric wanted to establish a nursery from scratch and purchased two and a half acres in Yass. The whole family moved there and he and his wife, Gerdina, established Bryant’s Nursery. Initially it was to be a fuchsia nursery but because there was no nursery in Yass people kept making requests for various plants and trees and they expanded into a general nursery and Gerdina grew herbs. It became very successful, awarded Outstanding Nursery in New South Wales in 1985 (or 87) by Nursery Industry Association NSW. Cedric describes the activities of the Nursery, herb growing.

During this time Cedric heard about John Brookes and his new scheme of gardening, bringing the outdoors in and the indoors out. Instead he would have big doors you could open out onto patios into the garden. His first book, “The Room Outside”. He attended one of Brookes’s courses at Denmans in the UK and describes the course content. On return to Yass Cedric ran his own small classes in garden design.

He had a particular plan for the nursery, with trees for sale identified by numbers, not plant names, and arranged as display gardens … people could take the list, it was a bit like a Chinese restaurant. They’d go along and say well we’d like a number 24 and … could see the actual trees growing and what they looked like. At the same time Cedric was giving talks to the Agricultural Bureau about growing trees and encouraging farmers to grow more trees.

Cedric started the Yass Garden Club – still in existence. He highlighted the benefits of the training he received at Esso and how he was able to adapt that in his nursery; bookkeeping, marketing and capturing ideas at national horticultural conferences about pricing, design of the layout of nursery plants and overseas nurseries, when Cedric was constantly alert to ways of adapting European methods of nursery management, describing his approach as a constant learning experience.

In 1988 Cedric and the nursery were caught by the financial crisis; sold the business and moved back to Canberra the following year and began his garden design and horticultural consulting business.

Always ready to adapt and provide heightened customer service, Cedric discussed some of his projects which include:

Coloured plant labels now taken for granted in nurseries, but after attending a conference in America Cedric believes his nursery was the first adapt these.

During the 2003-08 drought Cedric worked with ACREW as a water ambassador making films and tv advertisements educating the public about waving water and conducted water-wise workshops about irrigation.

Cedric discusses his entirely organic approach to gardening, and contemporary discussions about Roundup and glysophate and various products.