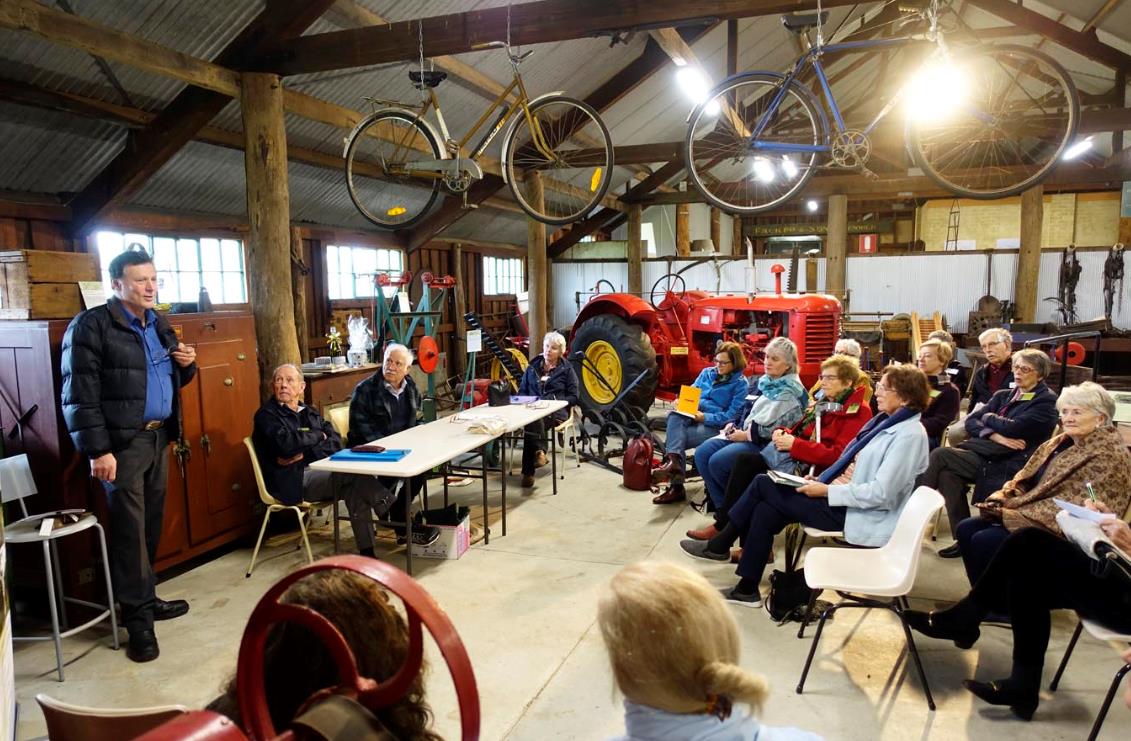 Welcome to the Western Australia Branch. Our Branch has approximately 75 members throughout the state. We conduct numerous events throughout the year, including lectures and garden visits. Members and guests are welcome to all events. We communicate with our members by newsletter, emails and the AGHS website for all events.

Full information will be in the Newsletter meanwhile mark these dates in your diary.

Annual Day in the Country

On Sunday 27 September, 38 people, comprising members and friends, enjoyed the scheduled annual “Day in the Country” at Waroona, a comfortable hour and a half drive south of Perth.

The first muster point was at the world heritage listed site, Fairbridge Farm, with its distinctive cottages and chapel. The historic village, established by Kingsley Fairbridge in 1912-13 was designed to be a self-supporting farm school for migrant children. 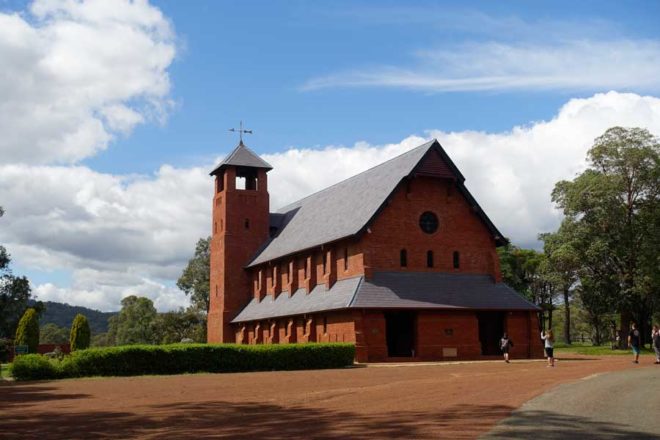 The Farm Chapel 1931 was renamed The Kingsley Fairbridge Chapel of the Holy Innocent in 1982. Photo: L. Tang.

The next event entailed a short drive to the Town of Waroona to view at the local museum a surviving Wardian Case, the only one known in WA. This was found in a farm shed in the area and had been modified into a dog kennel by cutting an opening in one side. Plants destined for the State Nursery established in 1897 were dispatched in it from the other colonies. After hearing of the rescue and subsequent conservation of the case, members inspected the displays specifically related to the nursery that was established close by at Hamel. 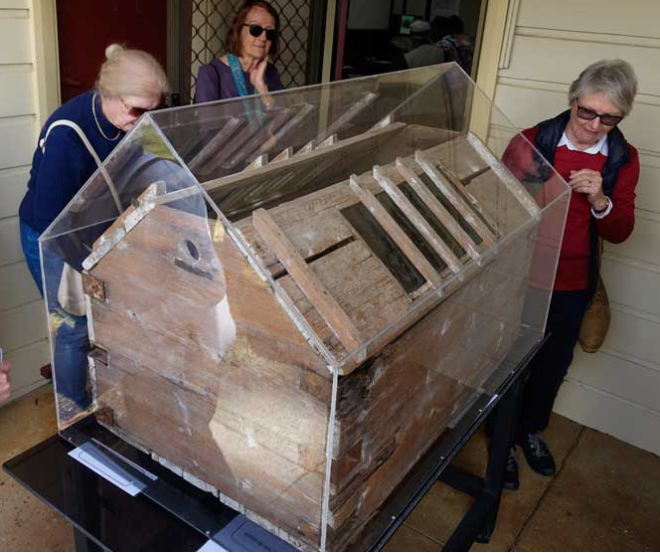 The remainder of the day was spent at Cypress Gardens, the property of Kingsley Dixon and Lionel Johnston. A convoy of cars negotiated the narrow, gravel road through the state forest to the gardens. Following a picnic lunch members were addressed by the owners who related the history of the site and their subsequent enhancement of the garden. The protected location, rich soil and abundance of water enables them to concentrate on cool climate plants with the introduction of deciduous trees, named forms of Japanese maples, lilacs , azaleas, hostas etc. Western Australian native plants have not been neglected and have also been established including a double flowering form of Geraldton wax. The red flowering and white form of the NSW waratah was a rare sight for West Australians and greatly admired. Three, early twentieth century, hand thrown terracotta pots provenance to the Hamel Nursery were presented to the owners in appreciation as well as a household membership. 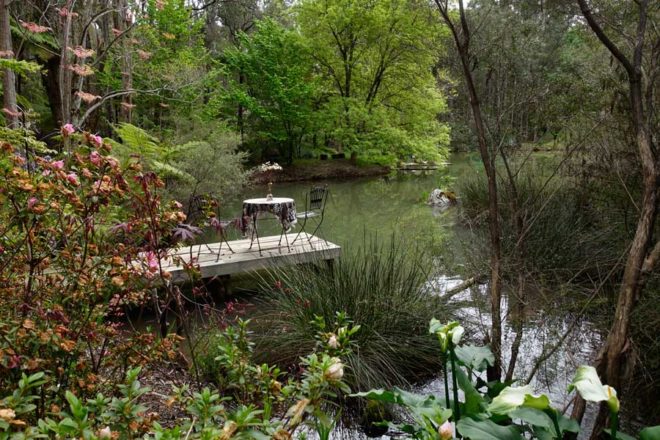 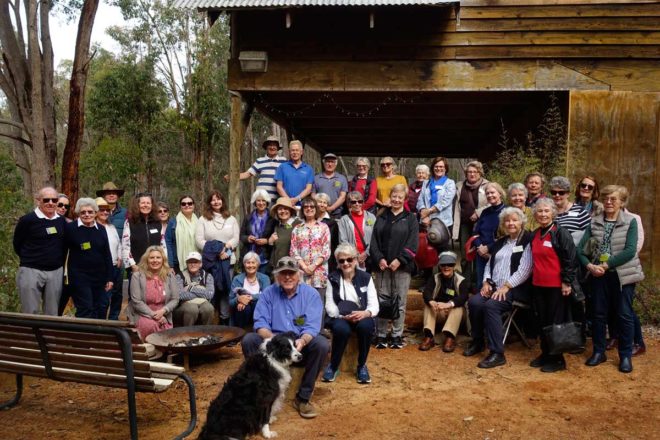 The WA Branch Christmas Party gathered on Whadjuk Noongar country in the grounds of Azelia Ley Homestead in Manning Park, Hamilton Hill in glorious weather. It was sunny and the sea breeze had well and truly come in so the temperature was kept to a balmy 24C.

The tables groaned with offerings of fine food and we toasted the end of an eventful year in the company of about 30 members. Andy from the City of Cockburn, provided a short overview of the history of where we were meeting and explained that the Council is seeking different ways to interpret the grounds and parkland itself - what better way than to seek information from the Australian Garden History Society.

Many of the members were not aware of the history, let alone the facility of the parklands itself and after visiting the Azelia Ley Homestead Museum and the ruins of the original Davilak homestead, we all felt well informed about the early settlement of this southern suburb of Perth.

The Proposal to run a cable car from Elizabeth Quay on the foreshore of the city, across the Mitchell Freeway and Mounts Bay Road and then up and into Kings Park was presented in 2014 by Planning Minister John Day, as part of the Elizabeth Quay development. The topic has been regularly in the local papers with Tourism WA actively promoting this construction as a way to bring more people into the historic landscape of Kings Park. The concept has been rejected by Chairman of the Botanic Gardens and Parks Authority, Richard Simpson noting that this would threaten the aesthetics, values and fabric of the Park. For more information please read the article in the AGHS WA Branch Autumn 2020 Newsletter.