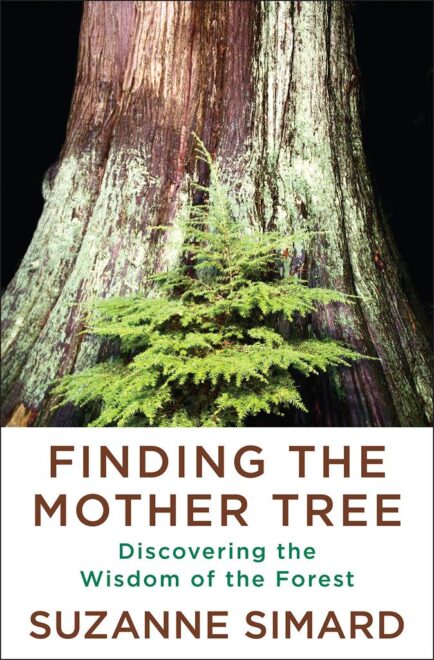 This book almost makes you want to be locked down! It is a compelling read. Every now and again, sometimes with long gaps between, I come across a book I want to run around and say to friends ‘you gotta read this’! This is one of those, especially for friends interested in trees.[1]

Suzanne Simard, a Professor in the Forestry Department at University of British Columbia has had quite a bit of exposure over recent years. She gave a great Ted Talk on how trees talk to each other and for serious readers of ‘tree’ books she was the inspiration for a key character in Richard Powers’ terrific novel, Overstorey, (2018).

Finding the Mother Tree is a mixture of autobiography, family history, science lab notebook and discussion of troubling forest management issues in Canada. Simard comes from a long line of loggers and forest people; she started her working life in the Canadian Forest Service.

But from the time she was very young she was fascinated by the ectomycorrhizal fungi in the great moist forests of her home in British Columbia. This innocent quest of a child grew into a serious scientific endeavour and her work is now widely recognised around the world.

I loved reading about the way she gets into the role of a research scientist. It seemed very familiar –  I was on the same path as a young scientist in different field. Bit by bit she found and developed novel ways to track the interactions of trees below ground, no easy feat. From that she has conclusively shown the level of interaction through highly specific fungi of certain tree species both with each other and between some, but not all, species. As well, the species seem capable of chemical “signalling” to each other concerning threats such as drought and attacks from insects or disease.

She and her colleagues and students have now shown conclusively the degree of interaction via the exchange of nutrients, including water, between trees in these great moist forests. This interaction is now known to occur widely geographically and in species.  I wonder if anyone has done or started similar work in Australia?

Of real interest to practical gardeners is her personal work in her own vegetable garden. She is a keen veggie gardener and with her two daughters has done quite a bit of spare-time research to show how corn, beans and squash (the troika planted by North American indigenous people) also interact to each other’s benefit.

Simard’s life is a mixture of highs and lows, just as her dealings with forest managers in both the private and public sector is. The way she weaves the science story around her personal story is very clever. It is yet another case of a scientist pushing back against established practices with solid evidence that shows contemporary management policies of forests have to change.

[1] I have one minor quibble with her over the use of chemicals. My quibble is because I still have not seen solid evidence, by a scientist, not a lawyer, that glyphosate does any harm to human or any other animal.