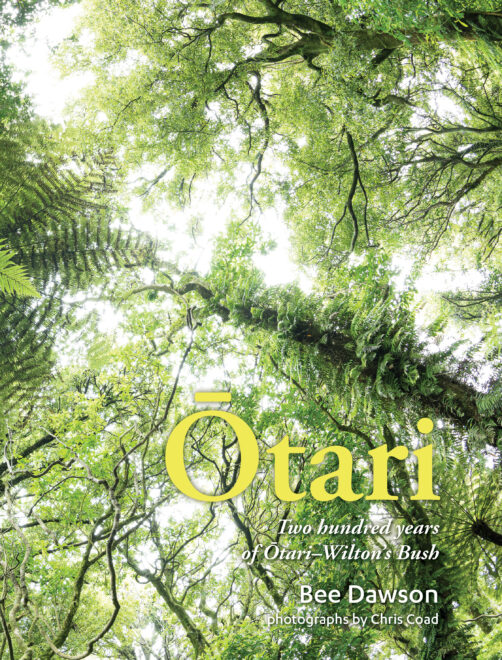 As a Wellingtonian who lives near Ōtari and walks there regularly, I am delighted a history of this very special New Zealand garden has been written. The historical account is by Bee Dawson, author of A History of Gardening in New Zealand (2010). Ōtari-Wilton’s Bush is the only botanic garden dedicated solely to the collection and conservation of the plants unique to New Zealand. It includes a native bush reserve including some of Wellington’s oldest trees, with over a hundred hectares of regenerating native forest.

Histories of institutions can be dry, with dates and associated events forming a seemingly endless plod to the last fullstop; not so here. Dawson maps the history of the area from pre-European times through personalities and plants and, as I turned the pages, I realised that the story of Ōtari-Wilton’s Bush is a story of heroes: botanical heroes who have saved, collected and preserved New Zealand’s unique flora.

The first group of heroes were the founders of Ōtari-Wilton’s Bush. Starting with farmer Job Wilton, who was so shocked by the devastation of the vegetation on the hills around Wellington in the early years of its settlement that he set aside 6.9 hectares of untouched bush for a reserve. Sixty years later Wellington’s first Director of Parks and Reserves, John Gretton McKenzie, was farsighted enough to propose the establishment of a “Living Plant Museum”. It was Leonard Cockayne, the third in this triumvirate and New Zealand’s most eminent botanist, who worked with McKenzie to get the collection established and planted in the 1920s. Such was Cockayne’s love for Otari that he asked to be buried there along with his wife, Maude.

Once established, how would the garden have survived without those who cared for it? Enter the second group of heroes, the curators. Many worked, and some even lived, at Ōtari for decades, botanising to expand the collection, seeking ways to improve the layout of the garden and developing educational and recreational resources while raising the garden’s profile. The Brockie rock garden, the inspiration of curator, Walter Brockie, is one of Ōtari’s jewels. From the first caretaker/curator, Andy McKay, to today’s curator, Tim Park, each member of this group has added another layer of botanical wealth and depth to Ōtari.

There is a third, very important, group of heroes. As well as dedicated and long-serving staff, Ōtari has been supported by dozens of volunteers, beginning with those who botanised to fill Ōtari’s beds in its early days. Others have battled to keep the rats, possums and mustelids under control for the last 15 years.  A revegetation group and the Thursday Volunteers, who weed every week, are both part of the Ōtari -Wilton’s Bush Trust, which was formed in 2001. Trust members also give guided walks, act as hosts during the weekend and fundraise to support projects in the garden. The Trust has funded the publication of this book.

Dawson’s text is complemented by many breakouts that give fascinating insights into things associated with Ōtari, as diverse as cub picnics, plant sale days and memorial plaques. Ōtari: Two hundred years of Otari-Wilton’s Bush is penned in Bee Dawson’s inimitable style of skilfully combining detailed and scholarly information with engaging stories of the many people who have contributed to Ōtari both past and present. The text is beautifully illustrated with contemporary photographs by Chris Coad, historic photographs from a wide range of sources and botanical watercolours, creating a history that will appeal to garden lovers, botanists, historians and those looking to learn more about Wellington or New Zealand.