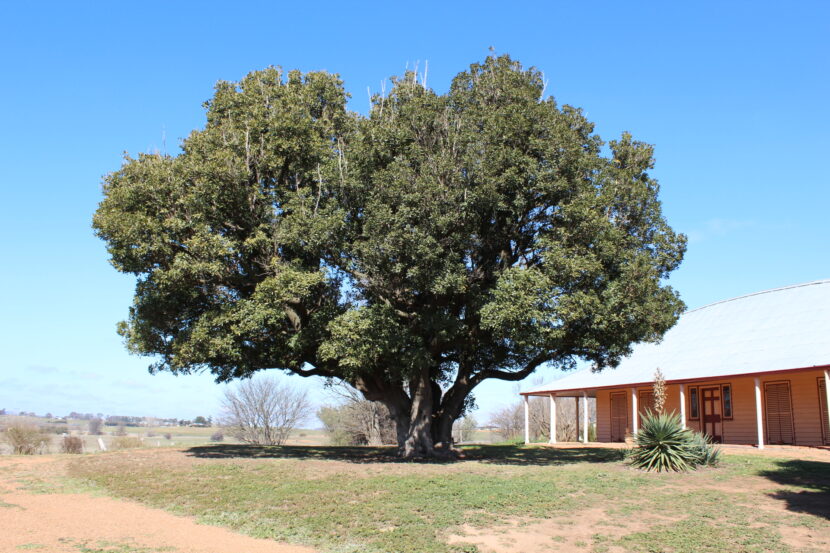 This rainforest (‘cloud or laurel forest’) tree is in the olive family (Oleaceae). It is endemic to the Canary Islands (recorded on five of the islands) and endangered in the wild due to timber clearance of that vegetation type and on the islands’ northern cliffs. It is at best extremely rare in Australia.

Picconia excelsa is a large shrub or small tree to 8 (-12, in Australia) meters, endemic to the Azores, scattered in coastal forest to 750m above sea level. Even in England, there is only one record of specimens of this, near Jermyn’s House at Sir Harold Hillier Gardens (1994 collection by E. Sjoren) (Grimshaw & Bayton, 2009, 561).

The tree has fragrant white flowers in spring, olive like fruits and heavy, white timber. This timber is valuable for tools and other uses, leading to culling. It is so heavy it does not float. The tree has simple, entire leaves, arrayed oppositely on the branch, dark green, glossy and leathery, with acute (pointed) tips. Bark is whitish/fawn and slightly warty/pimply on close inspection. With age it gets increasingly ‘shingly’ (see photos below). 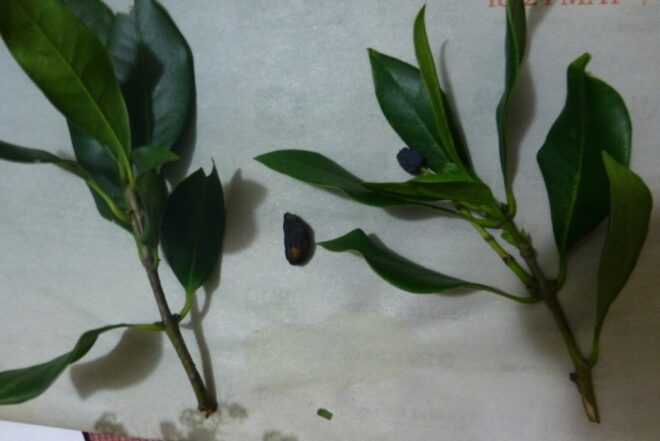 Picconia is not listed in any of the Camden Park Nursery or any other NSW (early to mid-nineteenth century) or Victorian (1855-89) nursery catalogues (perhaps reflecting difficulty in propagation rather than non-existence?). It is not listed in Hortus Camdenensis (www.hortuscamden.com c.1820-60s) nor Sydney Living Museums’ Colonial Plants Database www.sydneylivingmuseums.com.au/research) both of which focus on the nursery trade pre-1860 in NSW, based on records.

What are listed are multiple species/varieties of Olea spp./O. europaea subspecies. One of these is O. capensis – from South Africa – which is not Picconia excelsa but a relative, the black ironwood. It has larger leaves (though leathery, shiny and pointed-tipped, and olive-like fruits). A specimen was presented to Camden Park’s William Macarthur in 1822/3 and perhaps is even rarer in Australia. A specimen of black ironwood survives today at Camden Park, north-east of the east service wing.

Scottish/English polymath author/publisher/designer J.C. Loudon records Picconia excelsa (Flora Britannicus, 1830) as introduced into the United Kingdom in 1784. His Arboretum (1838) discusses specimens growing outside in shelter, one in Ireland. Perhaps this ‘tenderness’ worked against it?

While the timespan of both Hortus Camdenensis and the Colonial Plants Database stops at 1860, it can be supposed that Picconia excelsa came to Camden Park after that date. Either direct or indirectly. Camden Park Nursery and Garden volunteers (the late) Colin and his son, Euan, Mills propagated Picconia cuttings, resulting in one new plant in Camden Park’s Bidwill Garden, now some 4m tall.

Hilliers Trees and Shrubs (UK) omitted it in its 1977 edition, but the 1991 edition lists it, with synonyms Notolaea speciosa and Olea speciosa, as introduced into the United Kingdom in 1784. It notes a splendid specimen in the Abbotsbury Subtropical Gardens near Weymouth and, that at Romsey, Hampshire it is slow growing and survives uninjured in all but the coldest winters.

It is not listed in the English Heritage Handbook – the Management and Maintenance of Historic Parks, Gardens & Landscapes (2007) with long lists of trees, shrubs, dates of introduction to the UK).

New Trees – Recent Introductions to Cultivation (Grimshaw & Baynton, 2009, Royal Botanic Gardens, Kew in association with the International Dendrology Society, charts 1970+ introductions of species into northern hemisphere (UK, USA, European) gardens. Its entry on Picconia excelsa (p.561), notes it grows well in coastal southern England and Ireland and can form large trees in mild conditions. It also notes the publication of this species ‘in W.J. Bean’s (1914, revisions and supplements published up until 1988)’s Trees and Shrubs hardy in the British Isles, as Notolaea excelsa (Aiton) Webb & Bert.).

Examples in Australia and New Zealand

1-100 (young, yet to be planted out) Canberra, Yarramundi, National Arboretum of Australia, to represent Spain (N.B.: plants propagated by Euan Mills of the Australian Botanic Garden at Mt. Annan from Camden Park’s four trees).

NB: Gardner notes that all are less than 100 years old, he adds they rarely form fruit.

Bryant, Cedric, ‘Focus on trees – The rarest of trees’, in Heritage in Trust, 7/2017, (first published in the May-July 2017 Bulletin of the Horticultural Society of Canberra);