This volume of 15 essays  aims to explore the ways in which Francois Péron and other ‘scientific gentlemen’ conducted themselves on Nicholas Baudin’s expedition to Australia.

Two ships, the Naturaliste and the Géographe, set out from France in 1802, with the ostensible object of mapping the coastline of Australia and gathering specimens to enrich the Musée de Paris Museum collections, thus providing its professors with new objects for study. It was the practice to appoint naturalists on voyages of discovery; the Baudin ships departed France with 22 scientists and 32 officers on board. Numbers were soon reduced when 10 scientists left the expedition in Mauritius and five died from tropical fevers contracted in Timor. When the Géographe arrived in Sydney only 12 men were able to work the ship, 47 having died since they left France, the rest in the last stages of scurvy. Among those who completed the voyage were the artists Charles-Alexandre Lesueur and Nicolas-Martin Petit, and the naturalist Francois Péron.

From the outset there was tension between Baudin and Péron. Péron was an appointee of the Musée de Paris and although he was only a trainee zoologist, he was, as was encouraged in Napoleonic times, very ambitious. He saw his appointment to the expedition as a way to make his name.

The essays in this book detail many aspects of Péron’s work. He was undoubtedly a diligent collector and acute observer, often under difficult conditions. On one occasion, he suffered severe colic after tasting samphire (although it was more likely the contaminated water that affected him), and, when marooned on an island without water, he collapsed with heatstroke and dehydration before being rescued. Others on the expedition became very ill after eating cycad fruits, which they thought were chestnuts.

On Péron’s return to France, he failed to supervise the unloading of his crates and much of his data was lost or confused. Many of the living specimens were sent to Madame Bonaparte. Péron spent the remainder of his life, only seven 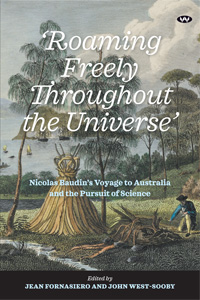 years, working on his specimens, claiming credit, some undeserved, for the collections and intending to publish his results. Most of these were never published; nevertheless,  botany and horticulture owe a great deal to his extensive collections.

It is unfortunate that this book does not include, beyond the cover image, any of Lesueur’s wonderful artwork. The black and white photos of stuffed birds are of poor quality and do not add anything to the essays. A map of the Baudin voyage and an indication of the collection sites would have been useful. The index is only of personal names, no localities or subjects, which makes navigating around the essays very difficult.

An aspect of Péron’s work that is not explored in the book is his probable involvement as a French spy. Governor King of New South Wales thought that collecting was not the principal objective of the expedition, but that the French were preparing to lay claim to Van Diemen’s Land and form a settlement on the mainland, already labelled Terre Napoleon on their maps.[1] Had that been the case, we’d all be speaking French!