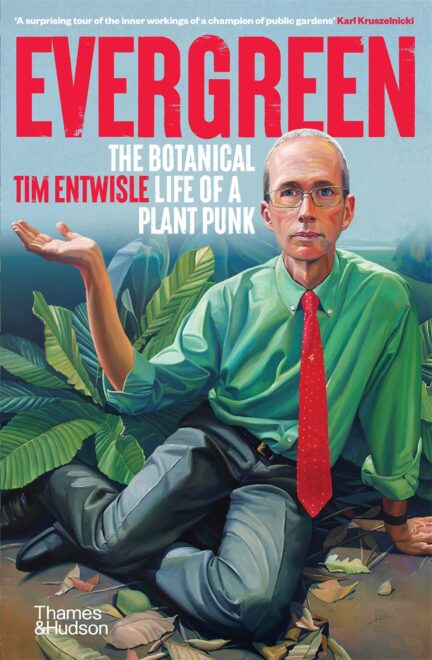 Tim Entwisle, Evergreen. The Botanical Life of a Plant Punk, Thames and Hudson, 2022, review by Max Bourke, AM

Full disclosure: Tim Entwisle is a person I admire, a phycologist [from the Greek phŷkos, meaning seaweed] on the road to being the Mick Jagger of the plant world, and Patron of the Australian Garden History Society so…

I first met Tim decades back when I was running the wildflowers program for Rural Industries R&D Corporation. He was then Director of Plant Science at the Royal Botanic Gardens in Sydney and we came together to talk about a forthcoming conference. We were drinking coffee in the Botanic Gardens café at a small table when a large bin chicken (Threskiornis moluccas for those serious birdos) landed between us, stuck its beak into Tim’s coffee and immediately upended it over both of us, followed by laughter and cleaning up! He has a good sense of humour.

This book is an autobiography written at a youngish age. It is full of ‘inside’ stories, a great deal of information about algae (Tim is/was he would say, a distinguished phycologist with not only a genera but also a family of a uni-specific alga named after him). It marches to the chaotic beat of punk music and bands that he has loved, especially Australia’s own Nick Cave who appears in various manifestations, including planting a tree in the RBG Melbourne.

I have happily known many Directors of both Australia’s and overseas Botanic Gardens from the time of Noel Lothian in South Australia and Lawrie Johnson in Sydney to Peter Raven in Missouri and Nigel Taylor in Singapore. I found all of them to be interesting and highly dedicated people, even though Johnson tried to get me sacked for making light of a problem of his on my radio science show! But Entwisle takes it to another level. He, rightly I think, perceives the role of chief executive as promoter, pusher and publicist as well as competent scientist. This book documents − with quite a bit of self-deprecation − his journey to leadership of two botanic gardens and a senior post in the ‘mother’ of colonial gardens, Kew. He is a serious student and this book clearly shows the influences on his life. Tim’s reading is eclectic: from ‘eccentric’ French authors on plants to Tolkien, Waugh and all the classics, as well as philosophy, all chosen in part to help in his search for good writing style.

Entwisle explains in depth his thinking about the role and function of botanic gardens in modern societies like Australia. I agree when he says:

…botanic gardens don’t have a monopoly on inspiring people about plants and gardens, and …[they], or any gardens, are made better by attractive or provocative design and a connection to local culture.

It is highly probable that quite a few members of AGHS, even those who have lived in Melbourne, will not be familiar with the bands that Tim enjoys but this musical aspect does add a richness to this book, and reveals a new dimension to our Patron.

He concludes with a note that all of us would endorse, especially post-Covid:

Here’s an idea, and one that may soothe…Perhaps we could reclaim the name physic garden and posit botanic gardens as a cure for the world’s ills.

Max Bourke AM former Deputy Chair of AGHS, has been a scientist, science journalist, head of several statutory authorities and involved in rural businesses. Being 20 years older than Tim his interests were more Lou Reed than Nick Cave.

Home » Book News » The Mick Jagger of the plant world